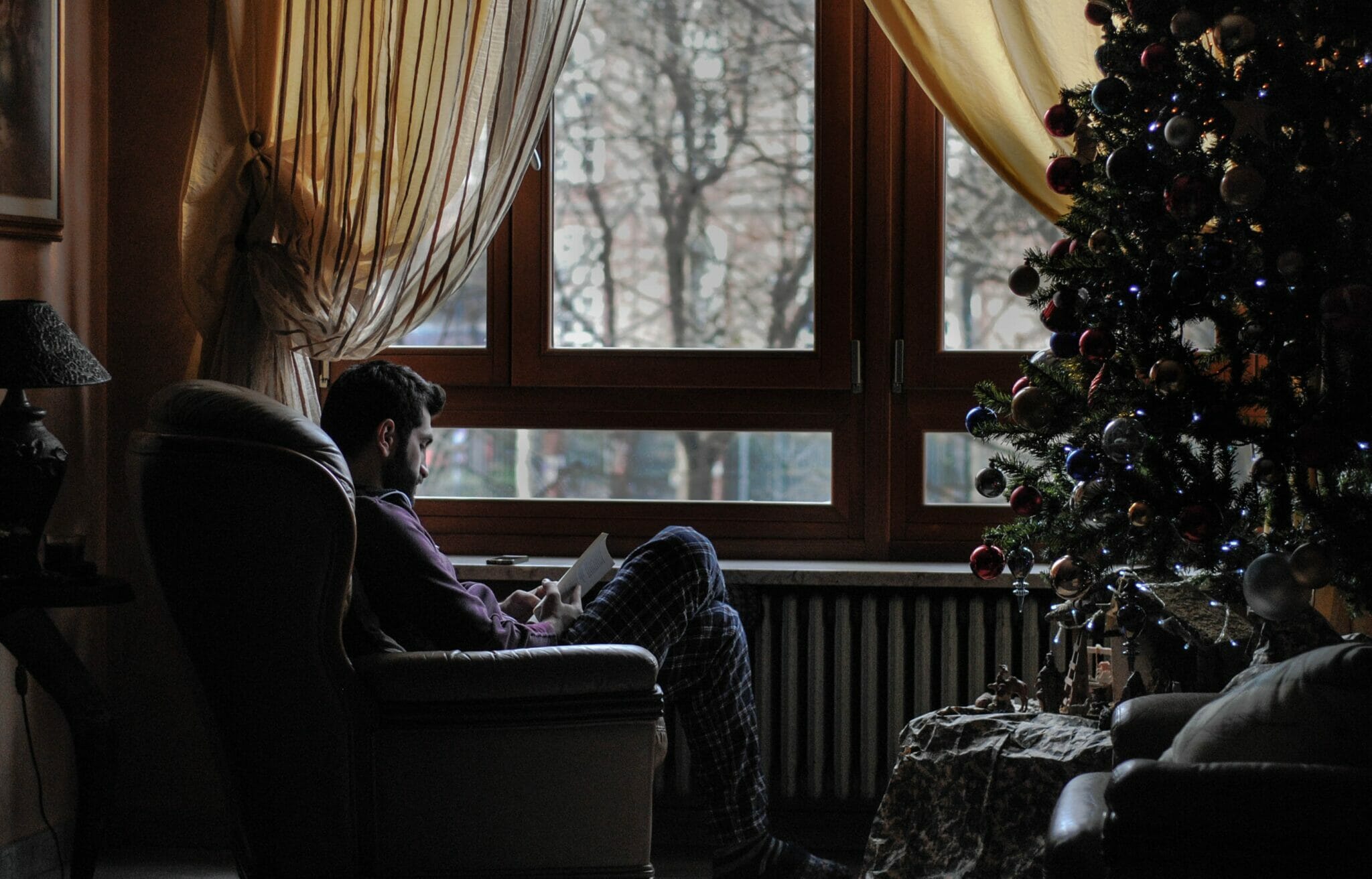 Wrap Up A Book This Christmas

Christians are, by their nature, a bookish kind of people.  The all-powerful, all-knowing, all-sovereign God of the universe who created all things for his Glory chose to reveal Himself through, of all things, a book.  The written Word is the single unified story about the personified Word, Jesus Christ, who was and is God’s plan to redeem and restore a fallen creation. We read the book, we submit to the God revealed in the book, and we are guided to the way of salvation and a holy Christian life by the book.

So it’s no wonder then, that we are drawn to reading books in general, and especially books that stir our affections for Jesus Christ in particular.  Our ability to read well will vary across the spectrum, but Christians ought to have the common denominator of being oriented toward reading books, especially as we dwell in the midst of a culture where thoughtful books are being replaced with thoughtless headlines and tweets to shape our minds and hearts on any number of topics.

With that in mind, each year our blog team releases a sampling of our favorite books that we fully endorse to buy as gifts for others, and request as gifts from others (or buy for yourself!).  You would be shocked what 15 minutes a day of reading a good book will do to mold you and mature you in the faith, and below are some great ones to dive into.

Excerpt: “Another MIT professor, world-class plasma physicist Ian Hutchinson, explains his view like this: I am an assembly of electrons and quarks interacting through quantum chromodynamics and the electroweak forces; I am a heterogeneous mixture of chemical elements. . . . I am a system of biochemical processes guided by genetic codes; but I am also a vast and astoundingly complex organism of cooperating cells; I am a mammal, with hair and warm blood; I am a person, husband, lover, father; and I am a sinner saved by grace.”

2.  “The Gospel Comes with a House Key” by Rosaria Butterfield

In American Christianity, there are topics that get talked about far more than they get practiced, and one of those topics is hospitality.  There is a wide gulf between knowing the benefits of true hospitality, and then the reality of true hospitality.  It’s often far more messier than we expect, and yet at the same time way more powerful than we anticipate.  There is a lost art of having people in your home, in a culture where houses have become castles, and Biblical hospitality is not just for those who have a “gift” for it, it’s for everyone.  Butterfield will help “radically ordinary hospitality” become a reality.

Excerpt: “Those who live out radically ordinary hospitality see their homes not as theirs at all but as God’s gift to use for the furtherance of his kingdom…the household that loves things too much and loves people too little cannot honor God through the practice of radically ordinary hospitality. The household that has too much and thinks too highly of material possessions has become seduced by the idols of acquisition and achievement.”

Ok, while Confronting Christianity is the best book I’ve read this year, Disruptive Witness is the best book on evangelism that I’ve ever read.  This is not a book that spells out a 3-point argument to go to non-believers with, but rather it gives a holistic picture of what a faithful witness looks like in your life.  If Christians recapture the bright witness of a life committed to the Lord, then it will disrupt the increasingly secular and distracted culture around us.

Excerpt: “The distracted age has three major effects on our ability to communicate about matters of faith and ultimate meaning: (1) it is easier to ignore contradictions and flaws in our basic beliefs, (2) we are less likely to devote time to introspection, and (3) conversations about faith can be easily perceived as just another exercise in superficial identity formation.”

4. “The Bruised Reed” by Richard Sibbes

I don’t know if telling you this book was written in 1631 will make you more likely or less likely to read it, but either way, you’ll be shocked because if you didn’t know you may think it was written in 2019.  This book applies the sure strength of the gospel to the downcast weakness we so often feel in life.

Excerpt: “But if we have this for a foundation truth, that there is more mercy in Christ than sin in us, there can be no danger in thorough dealing. It is better to go bruised to heaven than sound to hell.”

It was back in college that I first opened up this book, and the truths within these pages have proven to stay close to my heart ever since.  Ney Bailey helps her readers understand the importance of knowing the difference between faith and feelings.  While feelings are a gift from the Lord, are they the engine He wants us to trust in leading our life?

2.  “It’s Not Supposed to be This Way” by Lysa Terkeurst

We have been going through this book in the Hopeful Family group, and it has been such a blessing.  The author, Lysa Terkeurst, opens up about her own story of a shattered life, and helps her readers remember the hope and promises we have in Christ.  We have all experienced, are experiencing, or will experience moments in life where we will say, “it’s not supposed to be this way.”  This book meets readers right where they are, and while validating their pain, it points to the importance of entrusting our hearts and dreams to the Lord.

Excerpt: “…hoping means I acknowledge reality in the very same breath that I acknowledge God’s sovereignty.  And, I’ve learned one more important fact: my hope isn’t tied to my expectations finally being met in my way and in my timing.  No.  My hope isn’t tied to whether or not a circumstance or another person changes.  My hope is tied to the unchanging promise of God.  I hope for the good I know God will ultimately bring from this, whether the good turns out to match my desires or not.”

This was a top pick by both Mary and Andy!

Mary’s Comment: Brian and I have been reading this book together this year, and it continues to amaze us that the author, John Bunyan, wrote this while in prison for illegally sharing his faith.  The story takes you on an adventure with Christian, the main character, as he journeys to the Celestial City.  Written as an allegory, John Bunyan’s heart behind this piece is to help believers better understand God’s love, grace, and forgiveness for His pilgrims as they walk on this path of faith.

Andy’s Comment: I can think of one book that I’ve read that had me on my knees praying when I finished it. This is that book. Written in the 17th century during Bunyan’s imprisonment for preaching without a license, Bunyan’s writing will probe your soul in a way few books can. Simply a must-read for every Christian.

Excerpts: “So I saw in my dream that the man began to run.  Now, he had not run far from his own door, but his wife and children perceiving it, began to cry after him to return; but the man put his fingers in his ears, and ran on, crying ‘Life! Life! Eternal life!’ So he looked not behind him, but fled towards the middle of the plain.”

“…the highway on which Christian was to travel was fenced in on both sides with a wall called Salvation.  The burdened Christian ran up this way, with great difficulty because of the load on his back.  He ran like this until he came to a place where the road climbed up a small hill.  At the top of the hill stood a cross and a little below at the bottom was a stone tomb.  In my dream, just as Christian came up to the cross his burden loosened from his shoulders and fell off his back.  It tumbled and continued to do so down the hill until it came to the mouth of the tomb where it fell inside and was seen no more.”

1.  “The Rare Jewel of Christian Contentment” by Jeremiah Burroughs

Burroughs suffered persecution and later rose to prominence as one of the most eminent preachers among the English Puritans.  At the end of his life he was among the assembly that produced the Westminster Confession. In this classic work, Burroughs explains how Christ teaches us contentment, and how we may acquire it, regardless of circumstances.  He does this with razor sharp precision, vivid illustrations, and a pastor’s heart.

Excerpt: “What is my affliction?  Is it poverty that God strikes me with? Jesus Christ had not a house to hide his head in, the fowls of the air had nests, and the foxes holes . . . now my poverty is sanctified by Christ’s poverty. I can see by faith the curse and sting and venom taken out of my poverty by the poverty of Jesus Christ. Christ Jesus was poor in this world to deliver me from the curse of my poverty.”

2. “To the Golden Shore, the Life of Adoniram Judson” by Courtney Anderson

This biography, first published in 1956 and still in print, tells the remarkable story of “America’s first foreign missionary” Adoniram Judson.  Hearing God’s call to the mission field, he left his comfortable life in New England for Burma (modern Myanmar) in 1812. His dedication to that country and its people, in spite of laboring for years with little to show, is still having its effect there today. A gripping adventure to boot.

Excerpt: “It is not because I shrink from death that I wish to live; neither is it because the ties that bind me here, though some of them are very sweet, bear any comparison with the drawings I feel at times towards heaven…I am not tired of my work, neither am I tired of the world. Yet when Christ calls me home, I shall go with the gladness of a boy bounding away from his school.”

In 1839 William Burns, 24 years old, stepped in to fill the pulpit of one Robert Murray McCheyne at Dundee, Scotland,  while the latter began a tour of Israel that would last several months. Under Burns’ powerful preaching the Lord began a great work of revival that spread throughout the land.  But this is only part of Burns’ legacy. He went on to live as an itinerant evangelist in China, spending much of his time with the young Hudson Taylor as he began his own ministry among the Chinese.  A remarkable account of one of the unsung heroes of the faith.

Excerpt: “From that night, Friday 11 August onwards, meetings were held every day for many weeks, and it seemed that the whole city was touched.  Burns himself tells us that the church was so crowded every night, many had to be turned away and that after every service there were throngs of people remaining behind for prayer and counsel. Prayer meetings sprang up all across the area, composed of old and young alike; several were even run and attended only by children.”