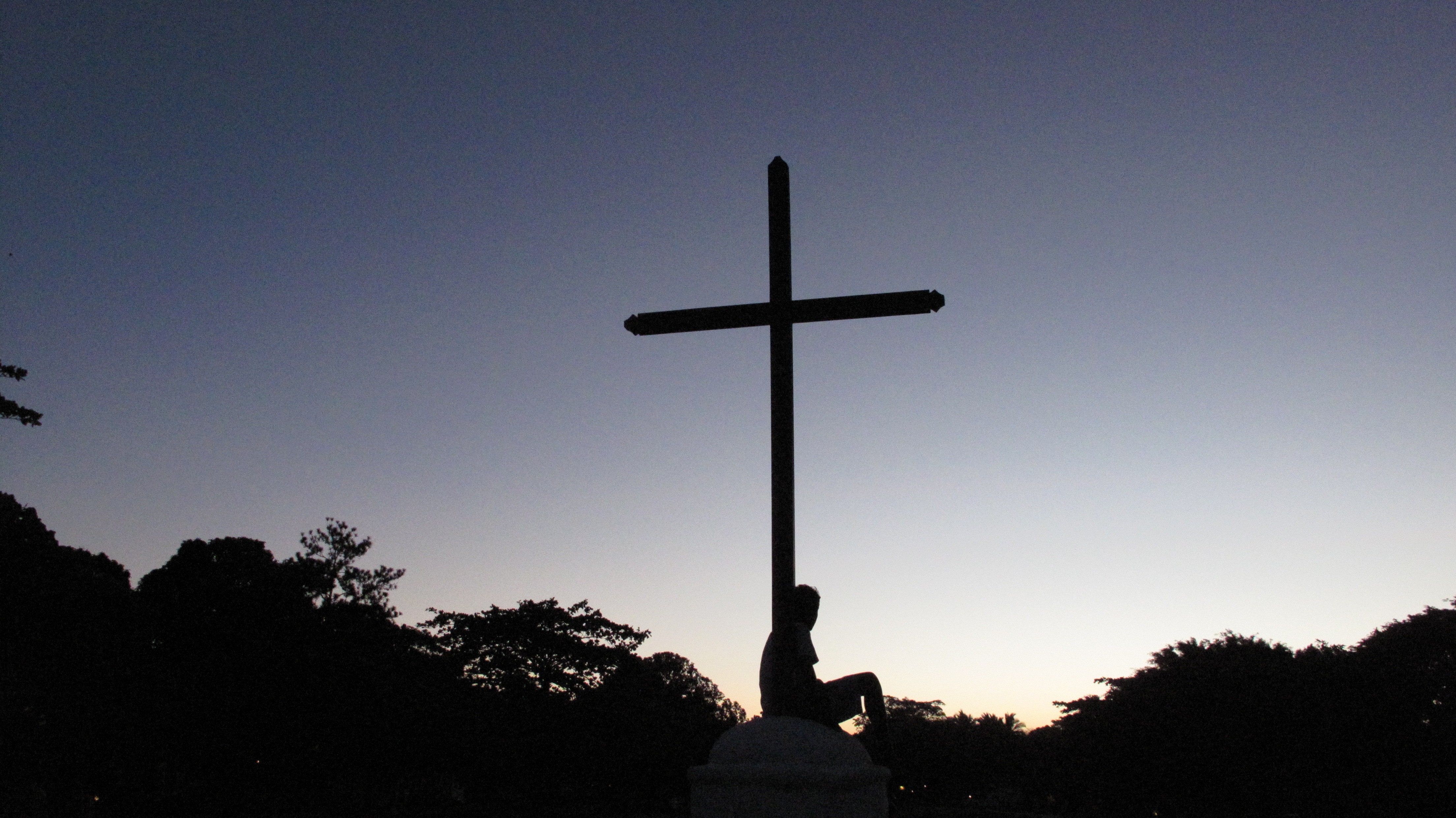 What If You Were There?

How do you approach Holy Week?

I often struggle with feelings of guilt as I usually let these days between Palm Sunday and Easter Sunday pass by with little to no recognition.  While I feel like I should be spending time in Scripture and prayer, being contemplative and grateful for Christ’s sacrifice on the cross, I instead allow my schedule to dictate my days and hours as usual and just like that, it’s gone.  Bunnies and eggs are put on clearance and my focus is set to the next holiday.  Can you relate?

My prayer for us all this time around is that we take little moments, every day, to remember the sacrifice Jesus made for us on the cross.  Slow down and make time to remember.  How can we better connect to this life changing event that occurred nearly two-thousand years ago?  I recommend reading one of the Gospel accounts, like Luke, chapters 19-24.  Hopefully the following narrative based on those chapters, as seen through your eyes, a bystander in the crowd, helps you connect on a new and deeper level to the sacrifice our Savior made for us.

You are on the side of the road as Jesus is coming into Jerusalem riding on a colt.  It’s a hot day, your feet are aching from standing but you can’t leave yet.  Excitement has filled the air.  Something in you knows that this moment will be retold to generations to come.  All around you men are throwing their coats on the ground for the donkey to walk on.  Palm branches are waving in the air as everyone joins their voices together as one and joyfully shouts, “Blessed is the King who comes in the name of the Lord!  Peace in heaven and glory in the highest!” (Luke 19:38).  You hear a few local pharisees call out to Jesus, “Teacher, rebuke your disciples.”  And you are stunned as Jesus responds with a smile, “I tell you, if these were silent, the very stones would cry out” (Luke 19:39-40).

The next day you ask around to find out where this Jesus is.  You have things to do, but you can’t seem to pull yourself away from this man.  You’ve heard about Him, it seems that everyone is talking about the miracles He’s performed.  People are saying He’s the Messiah, the long awaited King of the Jews, but He looks pretty normal to you.  His words still echo in your ears as you make your way towards Jerusalem.  You have to purchase a lamb anyway for Passover at the temple, and it is there you see something you will never forget.  Its Jesus, but He isn’t as calm and gentle as He seemed previously riding in on the colt.  Shouts are erupting as you watch Him driving out those who are selling the animals to be sacrificed.  For years these men have been taking advantage of your people by overcharging for these sacrificial offerings, and pocketing the extra.  You can see both grief and disappointment in Jesus’ eyes as he yells, “It is written, ‘My house shall be a house of prayer,’ but you have made it a den of robbers'” (Luke 19:46b).  What does He mean by that?  Why is He quoting from Jeremiah?  Is He saying the temple is His house?  Is He claiming to be God, the prophesied Messiah Jeremiah spoke of?

You finally pull yourself away to get back to your responsibilities.  Throughout the next few days you hear stories of this Jesus, He sure seemed to be stirring up some trouble with the religious leaders.  You wonder why it’s so hard for them to believe He is the Messiah.  Is it because He isn’t some noble king?  Is it because He’s taking the attention off of themselves?  Is it because He’s apparently from Nazareth, and you heard that just a few years ago he was working with his father as a carpenter?  But there is something about Him that just keeps drawing you towards Him.

It’s after lunch and you can’t believe it when one of Jesus’ disciples approaches you and asks to use your upper room for Passover.  Hours later Jesus and His disciples are reclining just upstairs!  You quietly walk up and stand against the door, listening to every word.  Your heart leaps as you hear Jesus’ voice over the others, they quiet down to listen to His words.  Was He really saying that the broken bread was His body and the cup is the new covenant in His blood?  And did He just say that someone was going to betray Him? (Luke 22:17-23).  What did that mean?  They start arguing about who is going to be the betrayer and then who among them is the greatest.  You hear someone call for you from downstairs so you reluctantly head down the steps.  A little while later the disciples thank you for the room and walk out the door.  You don’t realize it now, but the next eighteen hours will be some of the most significant hours of all time.

You awake early the next morning to horrific rumors that Jesus was captured the night before.  After being betrayed by Judas, He willingly followed the Roman soldiers into Jerusalem to be tried by the Sanhedrin, Pilate and Herod.  He was found innocent, but the mobs of people, many of whom just days before were rejoicing and calling him “King”, demanded Him crucified.  You know those jealous religious leaders had stirred up the crowd, but were they right?  If He was God, why did He willingly go with the soldiers?  And where is He now?  Surely if He’s the Son of God, He won’t let Himself get crucified.

You quickly leave your home and follow the sound of the masses.  You push through the crowd, but this crowd is different than the last one that surrounded Jesus.  Shouts of praise have been replaced with angry accusations, waving palm branches are now tight fists punching the air.  The pharisees look pleased as they gaze at Jesus, now stumbling along the road towards the place called the skull.  He was so badly beaten He can’t carry the cross so they have placed it on another man to carry for Jesus.  You continue following in the crowd.  Your heart is violently beating in your chest.  This doesn’t make sense.

You spot some of His disciples and a few of the women who followed Jesus.  Their faces…you can’t look away.  Tears are streaming down, they look so confused, so angry, so heartbroken.  You turn your gaze back to Jesus, and your knees fail you.  You hit the ground, and cover your eyes with your shaking hands.  You know what they are doing to him now.  You’ve witnessed the Romans crucify countless criminals before.  You can hear the hammer hitting the nails.  With every loud thud you shudder.  Soldiers are mocking him, you can hear their words and you want to defend him.

But why isn’t He coming down from the cross?  He isn’t some common criminal.  Isn’t this the man who raised men back to life?  Didn’t He heal the sick?  Why is He allowing us to do this?  And then it hits you.  Us.  This whole time you have been in the crowd.  You have watched, but done nothing.  You have listened, but not responded.  And now, it is all coming back.  Like being able to see for the first time, His words come flooding back to you so clearly.  You heard Him predict His death.  He knew this had to happen.  He knew he would be betrayed, mocked, crucified, and that He would die.  But why?  Again you hear it…for us.  You close your eyes and you can see His face…not grief stricken and bleeding as it is now, but loving and kind.  It was like He knew you, all of you, and still loved you, all of you.

Screams cause you to open your eyes and yet when you do its still dark, as if your eyes were still shut.  You blink a few times and realize that the sun is no more.  Its only noon, yet darkness has covered the land (Luke 23:44).  Fear grips you and you will come to learn that at this same moment the curtain at the temple had torn in two (Luke 23:45b).  What was separating man from God’s presence is no more.  Then those words…those words that will never be forgotten come out of Jesus’ mouth, “Father, into your hands I commit my spirit!” (Luke 23:46b).  And with that, He has died.

You slowly stand to your feet.  Tears fill your eyes as you hear one of the centurions proclaim, “Certainly this man was innocent!” (Luke 23:47b).  He really was the Messiah, the Son of God, you think to yourself.

You force yourself to return home.  Tomorrow is the Sabbath, and  you have preparations to make, but things will never be the same again.  You can’t wrap your mind around what has happened.

You awake Sunday morning and walk outside.  The sun is shining, but your heart feels like a stone within you.  How had this Jesus and his life and his words transformed you?  How had He given you hope you never knew existed?  And how can you go on now?  If you only knew now that within a few hours you are going to hear the greatest news of all, news that death has been defeated, news that the greatest promise has been fulfilled, news that a relationship has been restored, news that will bring healing, hope and transformation to the world until Jesus returns again.

“Then he said to them, ‘These are my words that I spoke to you while I was still with you, that everything written about me in the Law of Moses and the Prophets and the Psalms must be fulfilled.’  Then he opened their minds to understand the Scriptures, and said to them, ‘Thus it is written, that the Christ should suffer and on the third day rise from the dead, and that repentance for the forgiveness of sins should be proclaimed in his name to all nations, beginning from Jerusalem.” -Luke 24:44-47

And now that you know, what are you going to do?  Remember, He died for all of us.  Don’t keep it to yourself.  We may not have been there two-thousand years ago to witness Jesus on the cross, but He thought of you and me when He was hanging there.  He died for all of mankind on that day.  He took the punishment we deserved so we might have a relationship with Him generations later.

More than any other time of year, people are looking for a church to attend on Easter Sunday, so it’s an incredible opportunity to invite those God has placed on your heart to come to church with you.  Share the real meaning of Easter, beyond the ham dinner and egg hunts.  Share how Jesus’ life, death and resurrection continue to transform lives.  Share your own transformation story with others this Easter.