This weekend marks the beginning of “The Open” in the Crossfit world, an annual competition where gyms across every continent do the same five workouts over five weeks and athletes log their scores online to see where they stack up amongst hundreds of thousands of fellow crossfitters.  While Crossfit gets its share of shade thrown its way (and some of it is justified), they have successfully managed to create a sense of global community with The Open that is impressive by any measure.

The gym my brother Dave partially owns and coaches at, Crossfit Bison, is getting prepared for the first workout to be released tomorrow night.  If you were to drop in on one of the classes he coaches, what you’re likely to hear when demonstrating an Olympic lift can be summed in the phrase, “watch your eyes.”  The Bison members don’t blink when they hear it because they know what he’s talking about, but it’s kind of a funny phrase when you think about it.  Watch your eyes.  And yet, when he unpacks its meaning, it makes perfect sense. 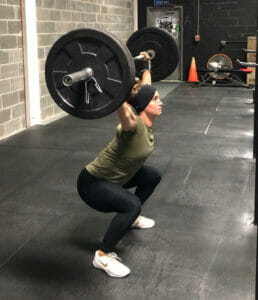 When you set up to do a lift, like a snatch or an overhead squat (as perfectly shown by fellow Bison Beast Brittany above), you underestimate how hard it is to fix your eyes on one target.  The tendency is to let your eyes drop to the ground as you begin a lift and your head starts to move, and so below average lifters (like me) often fail a rep because they let their eyes drift away from their target.  Once you move your eyes, your core softens, the form gets out of whack, and you’re no longer in a position to catch the weight in the position you’re supposed to in order to get a clean lift.  “As your eyes go, so goes your body”, Coach Dave would go on to say.  And when he did, it clicked in my head – this is not just true for Olympic lifting, it’s true for the Christian life as well.

Jesus said something similar to his followers long before my brother instructed his members, and it couldn’t have been more plainly spoken:

I think if Jesus had to sum up these verses in one phrase, he’d say, “watch your eyes.”

It’s such a small part of the body, but as your eyes go, so goes your body, and even beyond that – so goes your mind, your desires, your thoughts.  If you let them drift from the Target, our “form” in life will be off. There are dozens of examples that prove this to be true, but let’s just hit a few:

Social media: In 2017, the average time spent on social media from internet users was 135 minutes a day.  That’s 2+ hours (and has probably increased since 2017) of scrolling and staring at other people’s profiles.  Other people’s beautiful families, well-behaved children, exotic vacations, dream experiences, clean houses, and fulfilling lifestyles.  It’s 135 minutes of allowing thoughts of resentment, jealousy, and brainless entertainment soak in the rest of the body, darkening the joy and contentment we have with our own lives.  I love social media, and there is a lot of good that comes from it, but chances are if our default hobby is to scroll on a screen to stare at others best version of themselves, it won’t end well.  Watch your eyes.

Money: There’s no secret that the level of happiness one feels is often directly (and wrongly) correlated to how much money they have.  Money can provide a false sense of security, peace, and emotional prosperity, and we all can all resonate with the mantra that when it comes to money, we’ll be content if we just have a little bit more.  When our eyes are fixed on our bank accounts and stock portfolios, our joy rises and falls with the numbers there within.  Watch your eyes.

Bodyweight: It’s a good idea to pursue a healthy lifestyle and be watchful of what you eat and how much you exercise, but this could easily slip into an obsession over our physique and how we look.  No longer are people consumed with just the number on the bathroom scale, because now we have apps and wrist-watches that count steps, macros, carbs, proteins, and the amount of REM sleep we get.  The irony here is that obsession with healthy living and how we appear before others can be the very thing that makes us sick.  Watch your eyes.

We could go on, we all know we could, but suffice it to say: as the eyes go, so goes the body (and mind).  Once our eyes get off the target, our core weakens, and we’re susceptible to a proverbial failed rep.  A “failed rep” in life leads to either greater anxiety and crippling depression, or even worse, boastful pride and obnoxious pretension.  There is a lot we don’t have control of in this world, but we do control what we allow ourselves to stare at.  We can fix our eyes on a target that keeps us emotionally and spiritually balanced.

So, what’s the target, you ask?  Great question.  The author of the book of Hebrews also connected the physical to the spiritual when he describes the Christian life as a race:

Let us also lay aside every weight, and sin which clings so closely, and let us run with endurance the race that is set before us,  looking to Jesus, the founder and perfecter of our faith, who for the joy that was set before him endured the cross, despising the shame, and is seated at the right hand of the throne of God. (Heb 12:1b-2)

Jesus is the Target.  Once our eyes drift off him onto something else (like the list above), things get derailed.  But why is Jesus the target?  Well, because:

1) “Sin clings so closely”.  There is no salvation outside of Christ, and it is by looking to him that we see our need for a Saviour.  Just like a beam of light exposes dust, so the Son exposes sin.  At any given moment in this fallen world, we’re seconds away from sin.  It clings, it lingers, it hangs out at the places we hang out, it knows where we sleep.  We all try out hardest, and yet we all know ourselves more than anyone, that we come up short.  We have flaws, we’re not perfect.  Sin is so, just, close.  Keep your eyes on the Target.

2) “The founder and perfecter of our faith”.  When our eyes are on Jesus, we are convicted of sin and yet immediately comforted by the fact that while sin clings so close, greater is he that is in me than he who is in the world.  A sight of Jesus shows us we are fully loved, chosen, cared for, and protected by his sacrifice for us on the cross and his victory over the grave.  He founded our faith, he perfected our faith, and he will be faithful to bring us home.  Keep your eyes on the Target.

3) “Seated at the right hand of the throne of God”.  Jesus, right now, is interceding for us at the right hand of the Father, fully protecting all his people like a good shepherd protects his sheep, not allowing even one to be snatched from his hand.  Through the Spirit, who testifies to the person and work of the Son, we are equipped for every good work, to be the light of the world and be agents of reconciliation and justice.  Keep your eyes on the Target.

In 1918, a woman named Helen Howarth Lemmel sat down and wrote a hymn she originally titled “A Heavenly Vision”, but eventually became known as “Turn Your Eyes Upon Jesus”.  One hundred years later, it’s message still rings true:

Oh soul are you weary and troubled?
No light in the darkness you see?
There’s light for a look at the Savior
And life more abundant and free

Oh, turn your eyes upon Jesus
Look full in His wonderful face
And the things of earth will grow strangely dim
In the light of His glory and grace.